Those first 5 minutes were everything.

Ed Sheehan got one of the best scenes of the series till date....? Seriously that scene with Arya and the Lannister soldiers was so good. And my girl Sansa was on form this week.

^ Agree. I thought Ed Sheeran did very well and fit right in. Arya is owning the season already. haha

Sad that Ed deleted his twitter a day after Game of Thrones. Was he bashed or something? I thought he did well.

PS-------- DUNKIRK is getting RAVE reviews. Even Harry Styles is getting love. Cannot wait to see it!

Well, Sheeran didn't have anything to do with why that scene was good. The content of that scene was just so unexpected. I didn't know that he went off Twitter or why.

I need to break my 'not going to the movies' streak. Didn't watch wonder woman, homecoming or guardians of the galaxy. Not to mention all the movies from over here.
C

sur_crazy4carrie said:
Ed Sheehan got one of the best scenes of the series till date....? Seriously that scene with Arya and the Lannister soldiers was so good. And my girl Sansa was on form this week.
Click to expand...

I agree with this as well. There are some who voiced out that the scene is just out of place, not in my opinion, it adds serenity to a turmoil-filled story.

My local theater is going to have 2 screens showing "Dunkirk" and 3 for "Girls Trip"! Are they really expecting GT to be bigger than "Dunkirk"? Seriously?

Oh, went to the theater for the first time in forever last weekend and saw "Baby Driver". It was really good! I was on the edge of my seat for the whole movie. Actually caught myself holding my breath a couple of times and had to remind myself to breathe. Lol

Lost City of Z: I kind of knew the basic gist of the film but it's not entirely what I expected, especially the dreamlike and allegorical parts of it. It's a really well made film in terms of its visuals, pacing and performances. I didn't know that Charlie Hunnam could actually ACT. Glad to see Robert Pattinson is getting to showcase himself more. We get a strong nuanced performance from him. Tom Holland is in this... whaaat..??!! And yet another film, yet another role where I think "she's good. wonder who she is" and it turns out to be Sienna Miller. What is wrong with me that I can't retain this woman's face? I loved the ending. I would usually complain but I think the intended effect was achieved. I kept trying to make sense of the passage of time and the kids' ages in this but I suppose it made sense to those who paid close attention to it. I recommend it.

I know it's way early but I have a feeling we will be hearing...

"And the Oscar for Best Achievement in Directing goes to... Christopher Nolan, Dunkirk!"

"Dunkirk" is the kind of movie the Academy loves. Although the movie's script is thin, meaning not much dialogue, Nolan has a way engrossing you in the film. I think he's on lock for a directing nomination, as is the film itself for Best Picture. I can see a sweep of technical categories. However, I think it will miss acting nominations and screenplay, simply for lack of dialogue.

Although his filmography is not huge, Nolan is nonetheless overdue. He was robbed by not even receiving a directing nomination for "The Dark Knight". He is the premier filmmaker of this generation and the Academy needs to acknowledge that.

The film itself is going to require a second viewing for me. I tend to have trouble understanding the British accents and you can't rewind at the theater. Lol That said, the film is a visual masterpiece. As I said, I think it will win Cinematography, Editing, Sound, etc.

I'll hopefully watch Dunkirk next weekend. I think the Academy is gonna fawn over it.

The new trailer for Ragnarok looks camp and awesome.

Everything from the Disney Expo from the other week: https://ohmy.disney.com/news/2017/07/20/everything-we-know-about-the-upcoming-walt-disney-studios-films/


I think tonight's the night guys. I'm going to sit down after work and start looking at predictions and make a new thread

^^I still haven't seen Wonder Woman or Gardians of the Galaxy 2. I really want to see both but I'd be lying if I said I wasn't getting tired of superhero movies. They pretty much have to be getting raves for me to want to see them.

Lol, wasn't crazy about the movie, Guardians of the Galaxy 2 (took my grandson), but bought the soundtrack before I got home.

My sister joins sag on Wednesday. I asked her as an early xmas gift can she send me all her screeners she'll get

So I got to see Dunkirk today! Wow. It was powerful. Chris Nolan definitely deserves his first Oscar Directing Nom. It was raw, authentic, and painfully desperate. You could feel the despair and desperation of the soldiers-- it was palpable. What I liked is that is that it was not sugarcoated or dressed up in a Hollywood Bow. It was real. No wonder the critics love it.

As for Harry Styles, good job. He surprised me with definite acting chops.

My only critique is that - as in the case of Hurt Locker-- not enough character development. I wanted a bit more of a story behind the War itself. That is why I found Hurt locker so dull. There was no character development and no one to really root for but the Americans generally. I like a Hero in my stories, and I prefer a backstory on the main character.

For Dunkirk, there was very little character development and no real Story outside of the War, but it was still brilliant anyway. You left feeling the uselessness and despair of the War, and the painful loss of so many people. It was raw and it hurt.....but that is what makes a great movie.

Question for Game of Thrones fans: Was that white Wolf really Arya's lost wolf, or some random pack? It was a powerful moment. I just want Arya to finally reunite with the last of the Starks finally. How strange that she did not know John Snow is King. 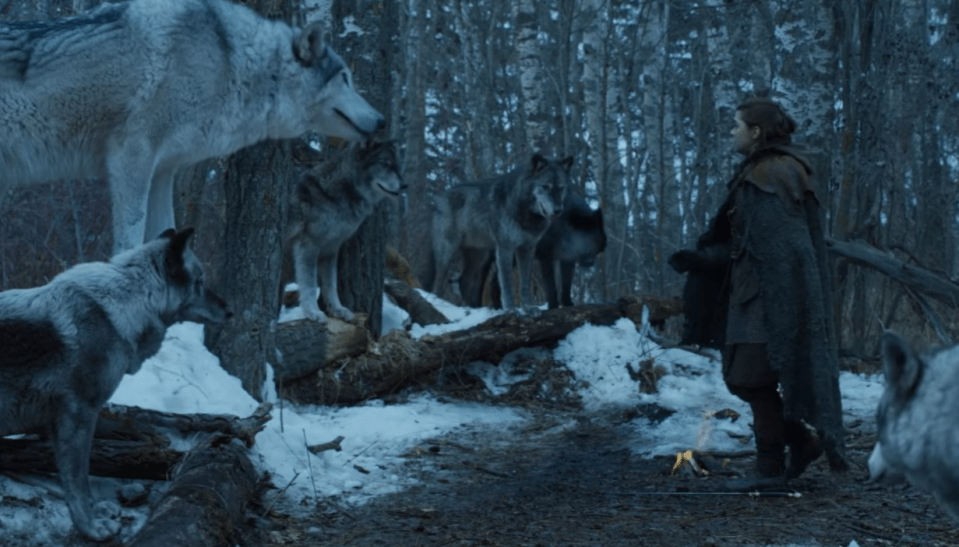 Dunkirk was thrilling to say the least. The cinematography, the editing, the sound design and the score were all top notch. I'm still trying to piece together the 3 perspectives. I kind of dig that even in a war movie Nolan wants to give the audience a bit of a mindf*ck. I also would have liked a bit more detail on the event. I suppose we feel that way because the movie drops us right in the middle of the action. Maybe there isn't much more to say about the war and the extraction itself. On the character development side, it's hard to do when there's no "protagonist" that we're constantly following around. We get plenty of character beats though. Do not miss seeing this one in the theaters.
Come award season, expect a lot of technical nods and most probably a directing nod for Nolan.

Tee, yes that was Nymeria. She simply chose to stay with her pack than go with Arya. It's understandable that Arya wouldn't have known about that Starks taking the North back until she talked to someone about the North. I thought she would find out from last week's soldiers but you know... Hot Pie. It's more confusing why Dany and her team hadn't heard about Jon until Melisandre came to Dragonstone, especially with Varys and all of his resources. Also why hasn't someone from Castle Black sent a raven saying 'hey you know your bro Bran, we got him'?
* The look on Grey Worm's face when Missandei finally saw him was sort of heartbreaking
* Theon's PTSD - poor guy
* Jaime is still so blind.
* Good riddance to crazy Ellaria and her sand snakes. Could have had Arianne Martell but they chose to completely botch the Dorne storyline instead.
* Of course Jon leaves as Arya decides to go home. We are not allowed to be happy.
* Why are the scenes from the Citadel so gross?
* I am ready for Littlefinger to bite it. The f*cker can't die soon enough.
You must log in or register to reply here.
Share:
Facebook Twitter Reddit Pinterest Tumblr WhatsApp Email Share Link
Menu
Log in
Register
Install the app
Top