Three more days until Country’s superstar
@CarrieUnderwood
is at Fiserv Forum on her #CryPrettyTour360
What is your favorite Carrie song?

Wish I could join all of you CarrieFans going tonight! It's quite surely the best show you'll ever experience. Have a blast and let us see how much you enjoyed it by sharing here!


The @fiservforum outdid themselves tonight! This is me...carved into a 40 lb block of Wisconsin cheese in honor of our show here in Milwaukee! I’m speechless!!! &#55358;&#56768; #CryPrettyTour360#WheresTheWine 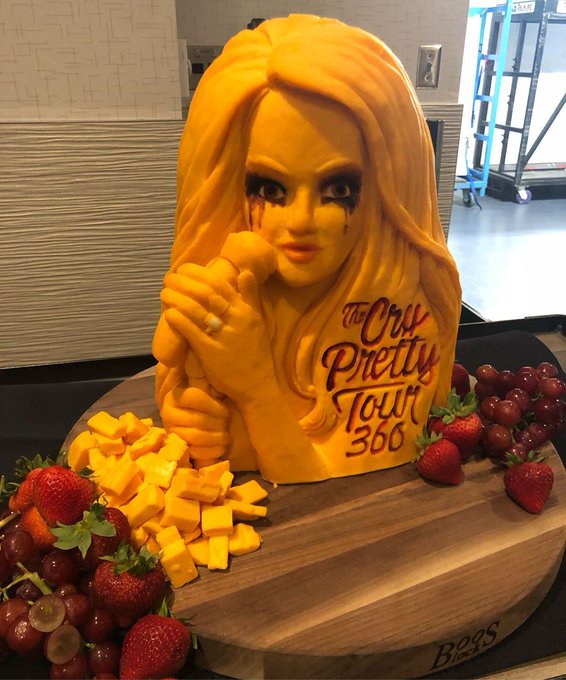 That is so wicked! What a talent to have.
C

Well what can we say
@carrieunderwood
... Milwaukee LOVES you. Please come back soon! 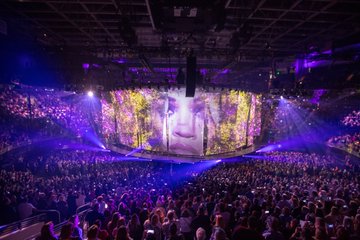 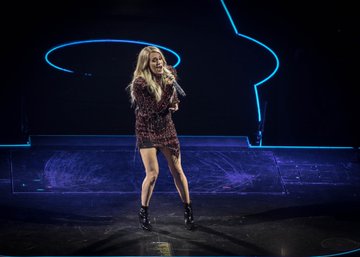 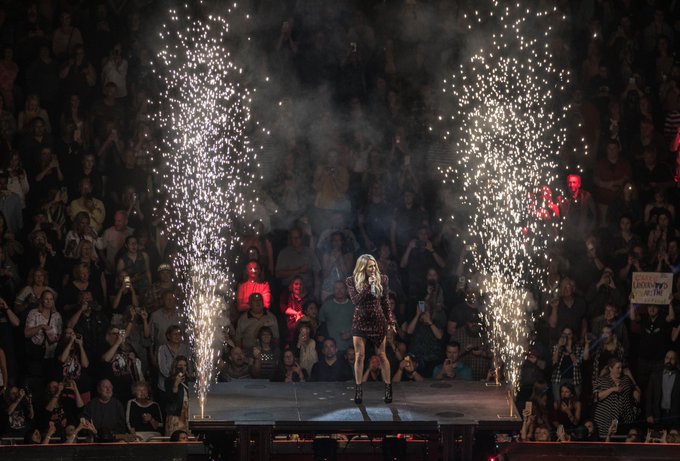 I tried to Cry Pretty, but I was Blown Away with emotions. Tonight wasn't Wasted, I wouldn't Undo It. Thank you
@carrieunderwood
#CryPrettyTour360 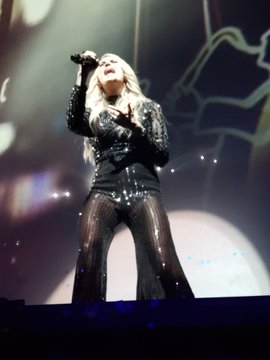 This is absolutely stunning 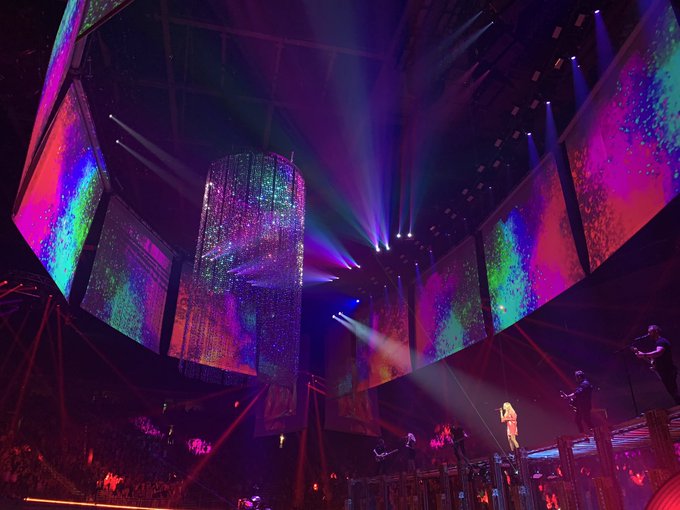 The most flawless tour! Forever in awe of queen
@carrieunderwood 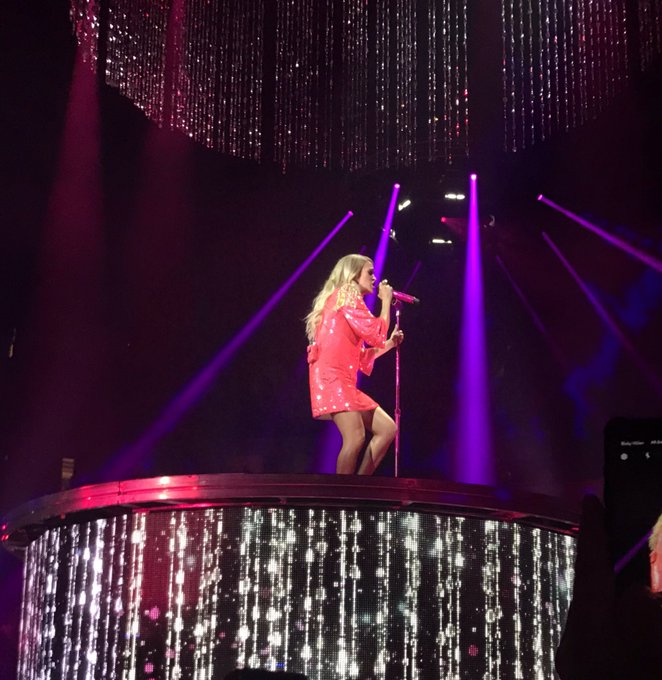 I’m going to need so much coffee tomorrow morning, but you can never say no to seeing the Queen, Carrie Underwood! 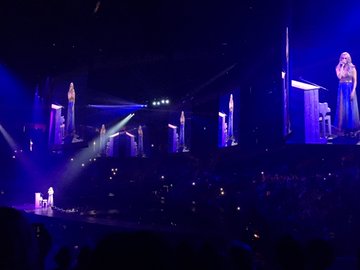 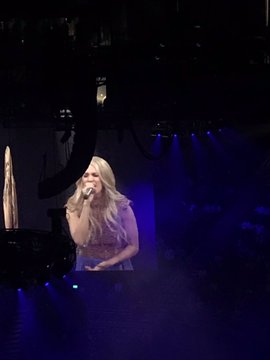 You KILLED it tonight in Milwaukee,
@carrieunderwood
!!! The stage, the production, the performance....you outdid yourself once again! Hoping WI sees you again in the not-so-distant future! 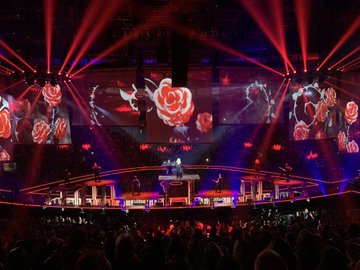 5 outfits, 25 songs, a 360 stage, and a whole lot of glitter! Carrie Underwood put on a spectacular show! 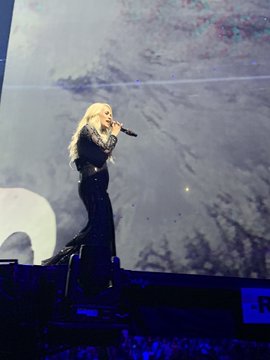 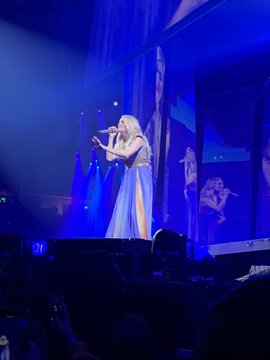 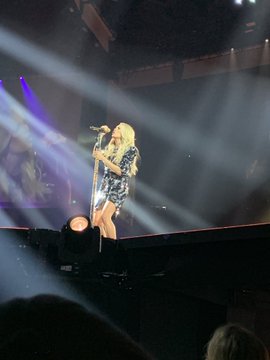 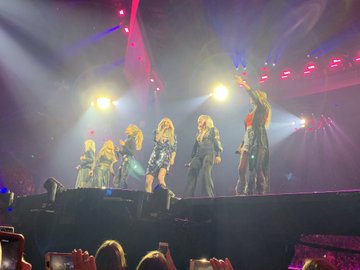 lots of photos at the link

Carrie Underwood literally took her fans to new levels Thursday night at Fiserv Forum.
Sure, a name like the “Cry Pretty Tour 360” made it safe to assume Underwood would be performing in the round. But that description seems quaint when considering the actual production of this show, which featured a massive stage that spanned the entire arena floor, was shrouded by gauzy, shape-shifting screens, and featured full sections that carried Underwood and her eight-piece band to the arena’s upper reaches.

On the opening “Southbound” alone, Underwood rose from under the stage toward the rafters while lasers swirled, a DJ scratched records and breakdanced across the stage, and glittery sparks exploded from below.

For many performers, this kind of over-the-top production would be hard to live up to. But with Underwood, all the technical wonders that modified the stage for each song seemed like they were just trying to keep up with her remarkable talents — from an immaculate voice that bounded from powerhouse and to soft lilt, often in the same song, to endless energy and a contagious spirit that swelled across her two-hour set and propelled Underwood as she marched, strutted and danced across the venue.

Garth Brooks set the standard for bombastic country arena shows in the 1990s; Underwood has lifted the bar even higher.
Fourteen years into a career that long ago made “winner of 'American Idol' ” a footnote to six platinum albums, 15 chart-topping hits, seven Grammy Awards, Grand Ole Opry membership, and all the other trappings of country music royalty, it would have been easy for Underwood to just craft a hit-filled show.
Easy doesn’t seem to be an approach Underwood could embrace, though.

She wove many of the tracks from last year’s album “Cry Pretty” — including the soulful swagger of a sax-infused lounge take on “Drinking Alone” and the stunning bluesy wail of “Low” — into a set list that paired the drunken regret of “Last Name” with the forbidden passion of “Backsliding.”

Concertgoers get their phones out before Carrie Underwood starts to perform at Fiserv Forum in Milwaukee on Thursday. (Photo: Colin Boyle/Milwaukee Journal Sentinel)

Then she disappeared below the stage for the night’s first costume change, and re-emerged to blend a portion of the tender, emotional “Temporary Home” with the uplifting approach to loss of “See You Again” in a midset medley that found Underwood accompanying herself on piano.
Later, she welcomed openers Maddie & Tae and Runaway June to join her for another medley paying tribute to female country artists, including Tammy Wynette, Loretta Lynn, Patsy Cline, Dolly Parton, The Judds, Martina McBride and Reba McEntire, who set the stage for today’s stars.
As Underwood appeared below the stage applying the dark, glittery eye makeup she also wore on the album cover of “Cry Pretty” and began singing a powerful encore of that album’s title track and the uplifting “Love Wins,” those legends likely would have agreed the legacy they built is in good hands.

Maddie & Tae emerged five years ago with the fierce independence of their bro-country-skewering debut single, “Girl in a Country Song.” In their 35-minute set Thursday night, that independence was combined with the stage confidence of a seasoned duo whose harmonies soared through “Fly,” danced along a weeping pedal steel on “Die From a Broken Heart” and roared into the honky-tonk spite of “Your Side of Town.” When the entire public-address system failed, leaving only the non-amplified beat of their band’s drum set audible in the arena, the pair turned the glitch into a fun impromptu silent dance party.
A poignant performance of “Blue Roses,” featuring just the beautiful vocal harmonies of Runaway June and a single acoustic guitar, was the highlight of that trio’s 25-minute set.


I'm including the above because they are part of the TEAM of women on this tour and BLUE ROSES was a stand-out to me from their set as well. Uh oh to the fail.

Great article! Also I haven’t seen that black jumpsuit outfit yet and I love it! All the outfits on this tour are phenom and I LOVE all the sparkle and glitter!!

Loved this part...Garth who?
"Garth Brooks set the standard for bombastic country arena shows in the 1990s; Underwood has lifted the bar even higher. "

Man these articles saying Carrie should be the EOTY, really are making it hard not to get,my hopes up. I have always told myself not to hope, but seeing things like this article really is making it hard.

video of TC at the link