Which Carrie fans are going?
C

TONIGHT:
@CarrieUnderwood
The Cry Pretty Tour 360 at
@PinnacleArena
! Here's some important reminders if you're coming. 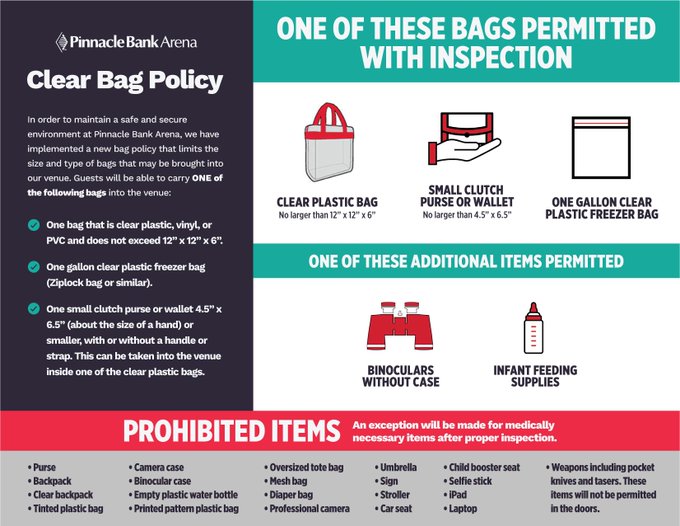 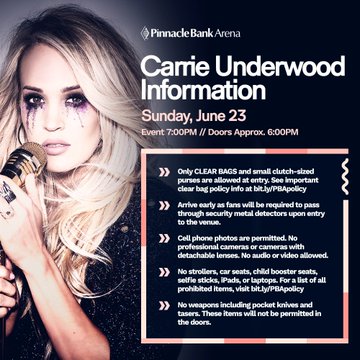 I can’t believe tonight is the final show of the first leg. This tour has been a massive success already. Excited to see the show myself very soon. I read Carrie is changing her looks on the second leg. Can’t wait for that.

^where did you read that? I’d like to see the article or video.

Smokyiiis said:
^where did you read that? I’d like to see the article or video.
Click to expand...

"And as we go, we will add more," Underwood said. "Like this fall, I am going to be like, 'I want to wear new things.' So we're probably going to add some more things."
Click to expand...

LouisaJessie said:
I can’t believe tonight is the final show of the first leg. This tour has been a massive success already. Excited to see the show myself very soon. I read Carrie is changing her looks on the second leg. Can’t wait for that.
Click to expand...

I thought the exact same thing when I saw her post! It’s practically over already! Only sep/ oct shows left. Went super quick.

My my prediction is she will drop the silver out in the 4th act. She’s worn it like twice. And maybe the yellow for the 3rd? I really love the black in the 4th act so another like that would be cool.
M

There is an amazing review from Licoln Journal Star. Nearly 12,000 crowd - AMAZING! Can someone copy and paste it here. Thank you so much in advance. I am very excited to see some postings from UK Tours soon.

Pictures at the link too

There can’t be a better arena show on the road than the spectacle Carrie Underwood brought to Pinnacle Bank Arena on Sunday.

That show has to be rooted in songs that have connected well enough to draw nearly 12,000 to the arena. Then those songs have to be well performed — and there’s no better singer in any style of popular music than Underwood.

Then comes the production — innovative, effective and continually eye-catching for the entirety of the nearly two-hour show.

​
Rising on a platform in the middle of one of the two lighted, curved runways that combined to circle the arena floor, Underwood was surrounded by lasers and sparks as she sang her new single “Southbound.”

Above her, scrims hung atop the oval stage, projecting her at times, and at others, for example, candles to heighten the emotion of “The Bullet.” The use of scrims rivaled that of U2's last tour, another production marvel. The platforms' continual use throughout the show was dramatically effective.

Cycling through her career, Underwood and her excellent eight-person band did a medley of her earliest hits and played plenty of “Cry Pretty,” her latest album — including the back-to-back pairing of the loungey “Drinking Alone,” complete with smoky saxophone, and “End Up With You,” with Underwood impressing on hand drums.

As the four-song opening blast highlighted by a snarling “Country Casanova” and her brief snippet of Aerosmith’s “Dream On” demonstrated, 40 years ago, Underwood would have been a powerhouse rock vocalist a la Pat Benatar and Heart’s Ann Wilson.

Today, the “American Idol” winner is the reigning queen of country, belting out ballads like “Jesus, Take The Wheel," bashing on a Stratocaster on “Church Bells” and visiting the old country trope on the set-closing "Before He Cheats.”

While showing she could be one of the great traditional country singers, Underwood, without saying a word, delivered a pointed critique of today’s male-saturated country radio.

“Southbound” and Runaway June’s “Buy My Own Drinks” make up a third of the songs by female artists in this week’s Billboard’s Top 50 country songs. That’s ridiculous.

Underwood, who did a Cher-level half-dozen costume changes — she likes sparkly sequined numbers — didn’t say a lot during the show.

She didn’t have to to keep the audience locked in to one of the best shows I’ve seen at PBA or any other arena.

Sooooo gonna miss these ladies over the summer! See you in September
@runawayjune
and
@MaddieandTae 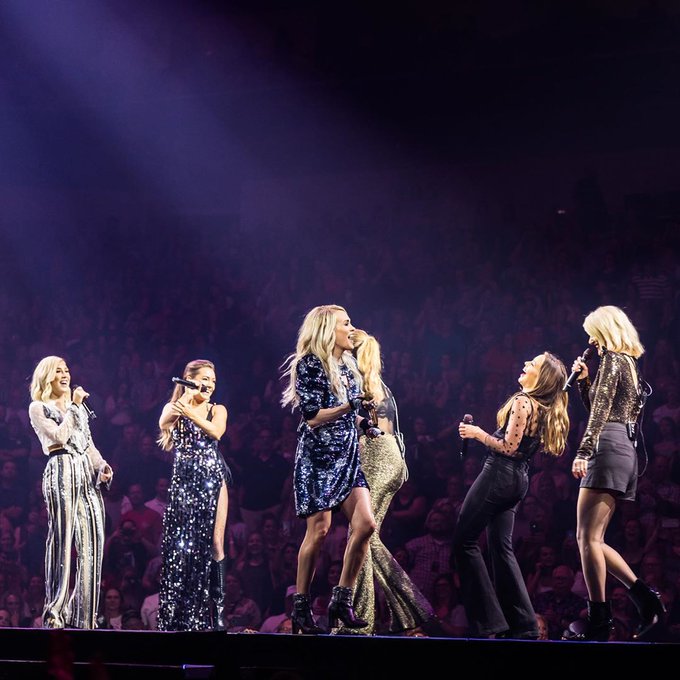 14 years later,
@carrieunderwood
, and you still couldn't disappoint if you tried. Thank you. #CryPrettyTour360 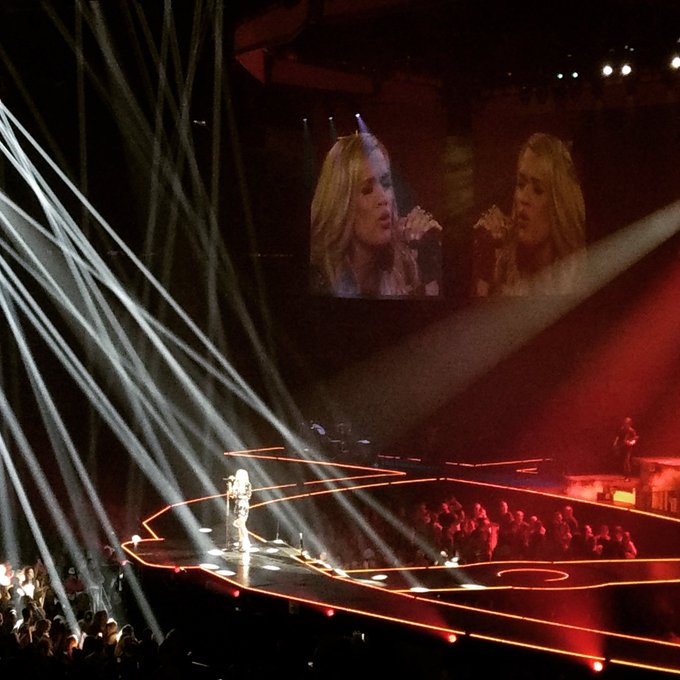 Seeing
@carrieunderwood
tonight at
@PinnacleArena
and it reminded me that I last saw her three years ago. And when I did, I had to beg my doctor to let me go because I still had unhealed burn wounds on my face and scalp. But she let me go!

Carrie Underwood in the house. Wow! What a show. #PBA 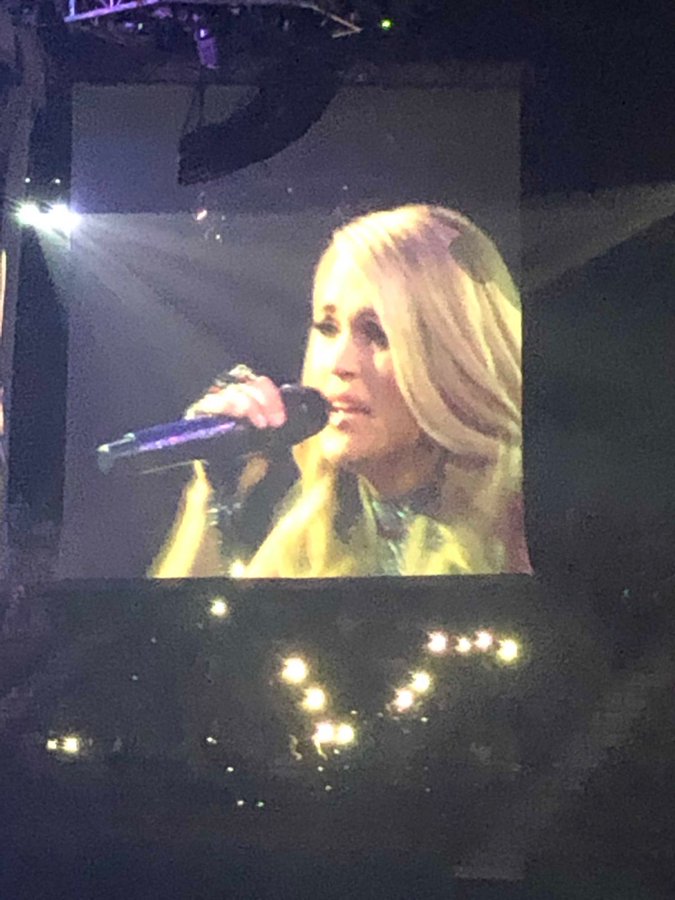 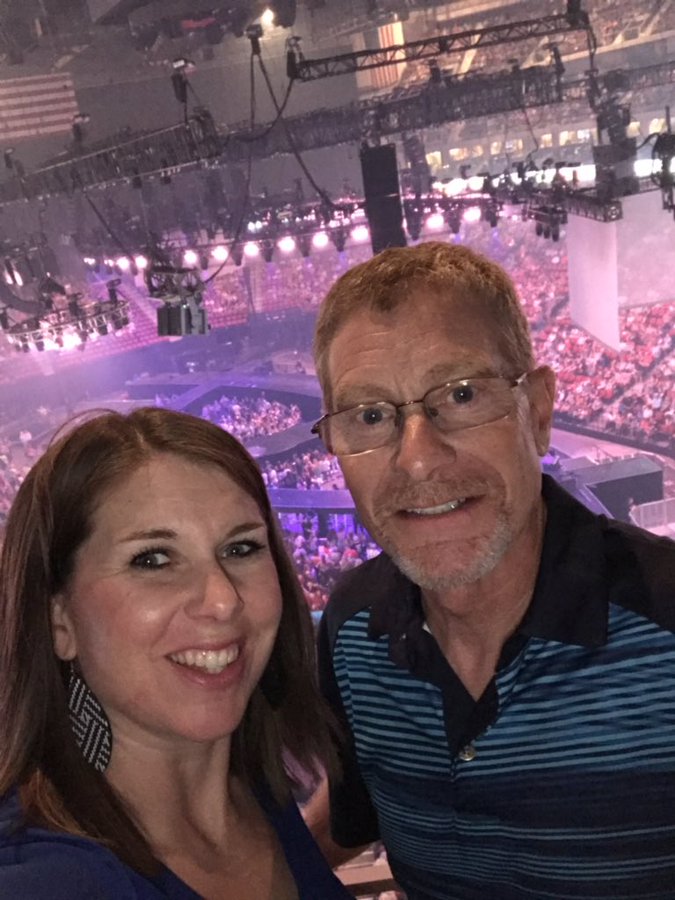 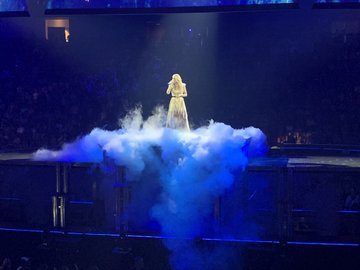 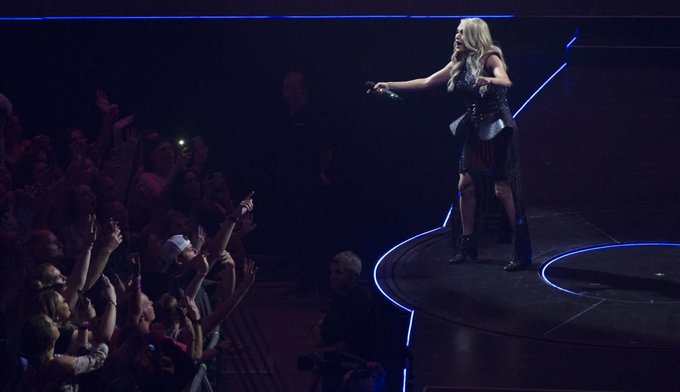 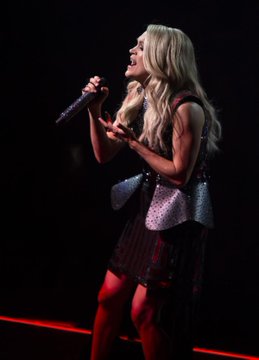 Might have shed a little tear when she came out! #CryPrettyTour360
@carrieunderwood 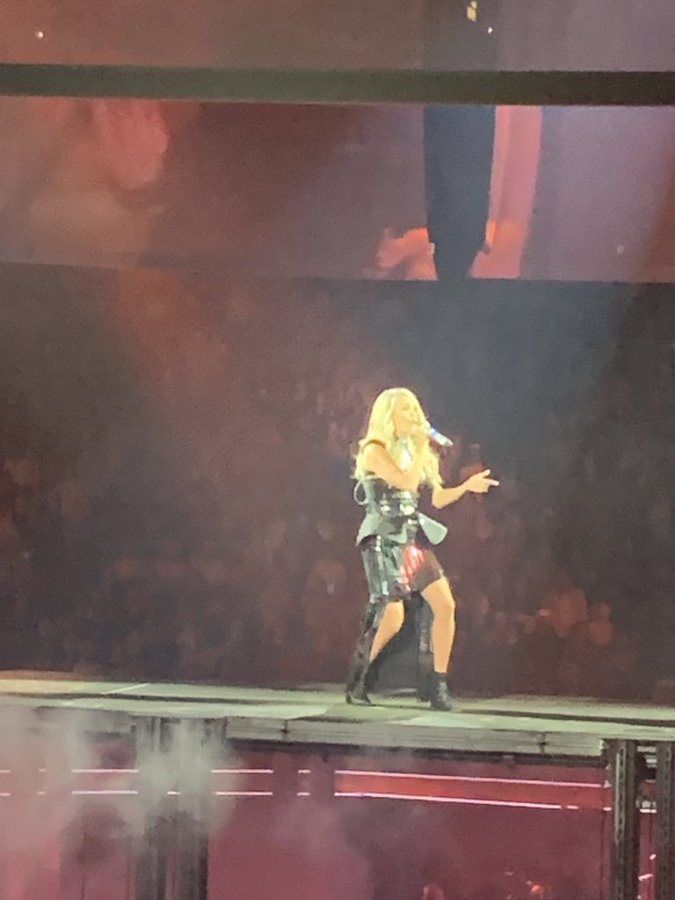 Guys I grew up following
@carrieunderwood
all through
@AmericanIdol
and tonight I got to see her in person!!
@MaddieandTae

@carrieunderwood
put on one heck of a great show!! Definitely not disappointed #CryPrettyTour360 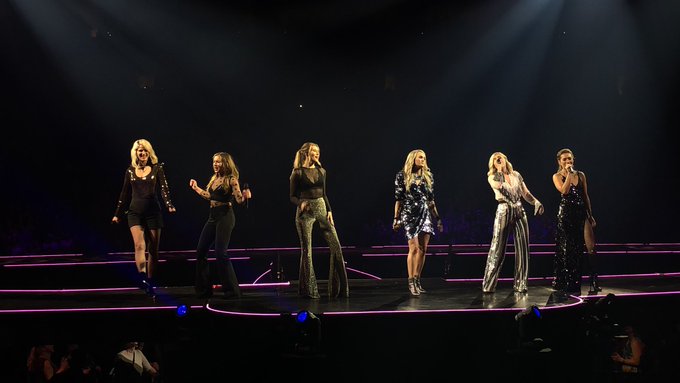 @carrieunderwood
showing family pictures on #CryPrettyTour360 was so sweet and amazing.

Phenomenal voice and person!
Come back to #Nebraska anytime 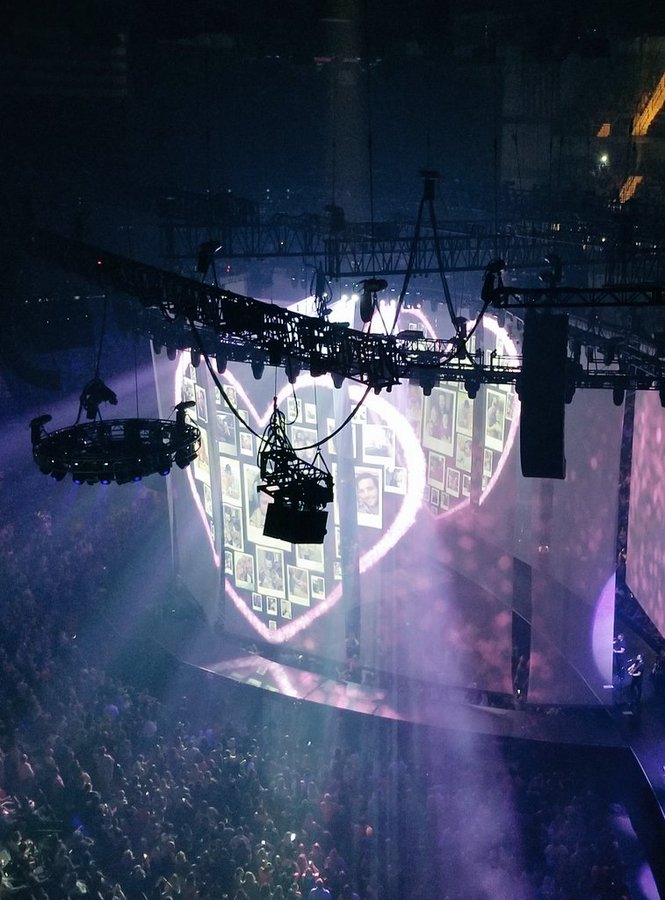 I don't like it that you know but Thanks Donna for the help.
M

Even at the end of the Spring Leg of Cry Pretty 360 Tours - Carrie's vocal is still so rich and very powerful! Stunning vocal endurance. This is one of my top favorite songs of Carrie, Cry Pretty, together with Before He Cheats, Blown Away, Church Bells, and Jesus Take The Wheel.

I’ve never paid a lot of attention to “American Idol,” “The Voice” or any of the other TV talent shows. But 14 years ago, Idol got something right.

Carrie Underwood was the hands down fourth season champion, winning easily every round of voting -- for good reason. She is a brilliant vocalist, who displayed that talent by singing the hits of Tiffany and Heart.


Unlike almost every other singing contest champion, she instantly became a star. Going country, Underwood hit the top of the charts with singles “Jesus, Take the Wheel,” “Wasted” and “Before He Cheats” and making “Some Hearts” the best-selling debut album from a female country artist ever.

Not surprisingly, those hits figured prominently into Underwood’s career-spanning Pinnacle Bank Arena concert Sunday. But the nearly two-hour show was also heavy on “Cry Pretty” with six of the 13 songs from the 2018 record turning up -- including both encore numbers -- the title cut and “Love Wins.”


That’s kind of a bold move to end with two new songs. But it shows both the quality of the songs and Underwood’s confidence in them and her ability to perform them.


It, however, takes far more than stellar singing and hit songs to make for a transcendent arena concert like Sunday night's performance.


In 2019, it requires staging, lights, video and other trickery that goes beyond the usual stage-at-the end-of-the-arena/giant video board setup.


Which is what Underwood’s crew brought to the arena on Saturday and Sunday. The show, presented in the round, was so complex that it had to be “pre-rigged”-- setting the points for hanging its extensive array of lights, scrims and sound equipment the day before the concert.


In the round, however, doesn’t really describe the staging. Two curved, lighted runways crossed -- think of those magnetic fish symbols displayed on cars -- with a connecting runway. Above that hung rows of lights, and scrims that followed the same curving path. Outside the curves were pods of lights which cast their colors as much on the audience as the performers on stage.


If that wasn’t enough, the runways were, in several places, interconnected mechanical platforms that would lift Underwood and members of her eight-piece band high above the floor throughout the show. Suffice it to say, she must have no fear of heights.


While the platforms were going up and down, the scrims above raised and lowered, with, most often, Underwood projected on them -- so everyone in the place had a close up look at her, even when she was singing with her back to them.


The only direct comparison I can use to describe Underwood’s staging is U2’s 2018 show at Omaha’s CHI Health Center, which utilized two giant scrims running the length of the arena. I called that presentation “astounding.” Underwood’s was all of that and more.


Stealing a page from the book of Cher, Underwood changed costumes about a half dozen times -- she goes in for sparkly sequined numbers. And she turned up banging on a Stratocaster after one change, donned a fedora and grabbed an old-style microphone for a smoky lounge number and did a more than credible job on a hand drum on “End Up With You.”


Combining showmanship, constant motion around the stage and on the platforms and her unmatched vocals, Underwood then became the consummate entertainer, performing in a state-of-the-art production


That’s what creates the rarity -- a great arena concert that stands out among the dozens of tours playing big buildings around the world.


Underwood’s concert drew nearly 12,000 people to the arena, not quite a sellout, but a very strong performance -- especially in light of other shows, like that in St. Louis a few nights early where parts of the arena’s upper level were curtained off.


The attendance, perhaps, was less than the 15,000 for Underwood’s 2016 PBA show because she hadn’t put out any new music in the three years before she released “Cry Pretty” last year. But it also may have been impacted by today’s male domination of country radio and, thereby its hits.


Underwood is far from an edgy artist, talking about faith and family in concert, posting cute videos, like that of her husband, former National Hockey League player Mike Fisher making their 5-month-old baby Jacob cry with his singing on social media and tweeting about how much she loved shows and the sculpture in her likeness that was made out of cheese -- in Wisconsin, of course.


So she’s never going to publicly bite the country radio hand that feeds her, or risk alienating the listeners by talking about the fact that , by and large, the format of late has become so male dominated that only six of the songs on last week’s Billboard country Top 50 were performed by women.


One of those was Underwood’s “Southbound,” another, Runaway June’s “Buy My Own Drinks.”


Runaway June, a trio of young women, was one of Sunday’s openers along with the duo, Maddie & Tae, creating an all-female bill, which joined together to pay tribute to their roots with a medley of songs done by country legends from Patsy Cline and Loretta Lynn to Reba McEntire, the Judds and Shania Twain.


That was a concert highlight -- as was Runaway Jane’s harmony-filled performance of “Blue Roses” the title cut of their forthcoming album. But it also made a strong yet subtle point that women have long been top country artists and are now being, to some measure, overlooked.


Cline, Lynn, Tammy Wynette, Reba, the Judds and Twain -- all covered in the medley - were often referred to as the “queen of country music” in their respective eras.


That is Underwood’s realm today. She’s occupying the throne not only with her songs and ability to sing them, but with a show that’s going to be hard for an artist of any genre to match.
Click to expand...

Um. What is that review?

Its nice in an underhanded way. And I thought she had spoken about the lack of women hence the women only tour.